It’s kind of funny to go back and look at old newspaper stories and press releases, because so many of the issues from the mid-1970s have changed so little in the last 40 years. This release is about good U.S. jobs being shipped overseas. In this case it involves the shoe industry, but the components of this story are little different than the stories we now see about other U.S. jobs being exported to other countries. Those shoe jobs never came back…

WASHINGTON, D.C. — The Maine shoe industry will not be able to provide an adequate number of good-paying jobs until the U.S. recognizes that it must deal firmly with foreign shoe imports, according to Sen. William D. Hathaway, D-Maine.

The Maine shoe industry, once one of the largest and strongest industries in the state, has been weakened for years by the importation of shoes made in foreign countries. The shoes can be sold for less money because of the low wages paid in the exporting countries.

“We have finally taken some positive steps in limiting the imports since Jimmy Carter took over the White House,” Hathaway said. “We must not relax those efforts until the shoe industry is once again strong and vibrant.”

The Carter Administration has managed to limit foreign shoe imports through negotiated orderly market agreements.  The agreements with the exporting countries limit the number of shoes which can be brought into the U.S.

“These agreements have not been negotiated with all exporting countries, and they do not place the stringent limits that I would like to see,” Hathaway said. “However, they begin a process which should lead to the revitalization of one of our oldest and finest industries, and we must not let down until the industry is on the road to full health.” 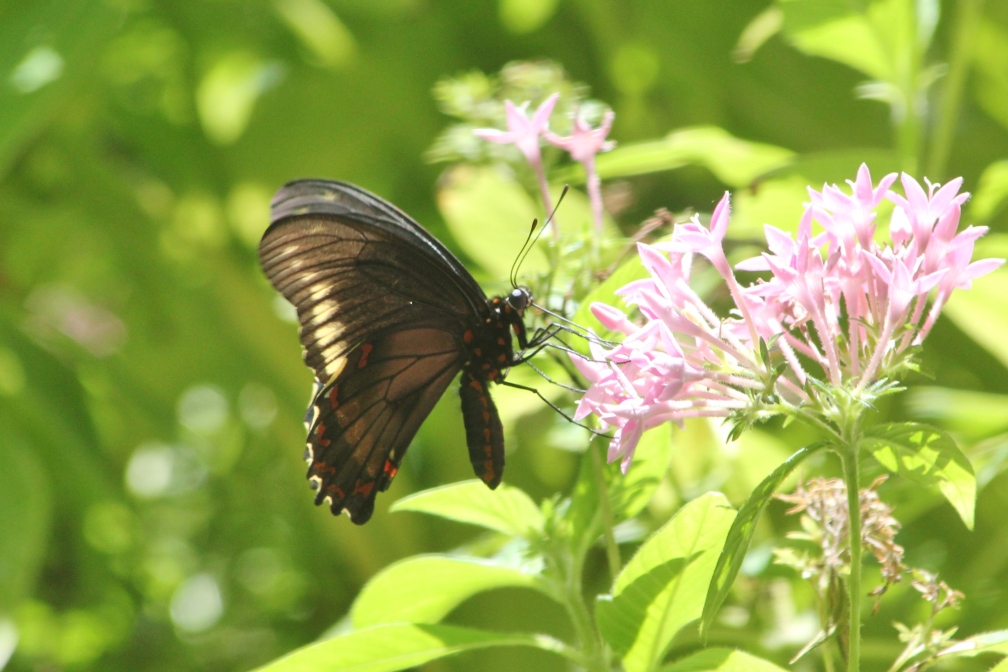 The first time I posted this picture I identified this creature as a moth. A friend got in touch and claimed it was a butterfly. So… butterfly it is, unless some smart person can prove otherwise. I was having enough trouble identifying my bird photos.

This news release unveils and explains a new surgical device. Since it is a high-tech product, there is a danger of getting lost in the details. This release shows how a potentially complicated subject can be treated simply, and can be readable and interesting in spite of its technical nature.

The next revolution in surgery may come
from a small, under-the-radar company

CLEARWATER, Fla. (June 7, 2012) — The next revolution in surgery may come from a small medical equipment company which, according to its own executives, has always preferred to fly a bit under the radar.

Bovie Medical Corp., a public company with executive offices in Melville, N.Y. but with labs and manufacturing facilities in Clearwater, Fla., has received permission from the U.S. Food & Drug Administration to begin marketing this summer on a new, non-contact surgical device it calls J-Plasma. Those initial evaluations are expected to take place in several surgical centers around the country.

“We announced the J-Plasma concept several years ago, but the process of getting any new product to market has become increasingly difficult and time-consuming,” said Rob Saron, Bovie Medical’s president. “Because of that, the initial excitement may have waned a bit. But J-Plasma’s time has finally arrived.”

Bovie Medical is known most widely for its cauteries and other electrosurgical products, but it owns three patents for the J-Plasma technology, the first of which was granted in 1999. The latest patent was granted last November.

Three other patents related to the new technology are pending.

END_OF_DOCUMENT_TOKEN_TO_BE_REPLACED

Probably best to read the preceding post before you read this one.

PORTLAND, Maine (UPI) – Everett C. Carlson helped blow up a National Guard truck in Boston and kept watch while others blew up a plane at Logan Airport and a courthouse in Newburyport, Mass., the governor’s star witness said yesterday.

Joseph A. Aceto, 23, of Portland, was the first witness in the trial of Carlson, 38, also of Portland, on charges of interstate transportation of explosives in connection with the bombings.

Aceto, who pleaded guilty Friday to three counts of interstate transportation of explosives, testified all morning and was scheduled to take the stand again today for cross-examination.

Aceto told the jury that he, Carlson, Richard Picciarello, 28, of Portland and Edward Gullion Jr., 28, of Boston’s Dorchester section, went to Massachusetts July 1 to bomb unspecified targets because of what they considered “oppressive acts of government against poor and black people.”

“The idea was to make demands… “ the slightly built witness said, speaking easily of the events.

At one point the group developed a list of eight to 10 possible targets, including a nuclear submarine at the Portsmouth naval Shipyard in Kittery, Maine, and jet bombers at Pease Air Force Base in New Hampshire and actually visited a section of the base,  Aceto said.

“Me and Piccariello crossed the fence onto the airfield,” he said. “Carlson got out of the car but didn’t cross the fence.

END_OF_DOCUMENT_TOKEN_TO_BE_REPLACED

This story, and the next one I post, may be the strangest series of events that I ever encountered as a reporter. Someone planted a bomb in the offices of the Central Maine Power Co. in Augusta, Maine one day in 1976 — not exactly a common situation in rural Maine. The next day my office phone rang, and a voice said: “This is the Fred Hampton Unit of the People’s Forces.” The man, speaking quickly and allowing no opportunity for questions, claimed credit for the CMP bombing and hung up. I stood there with the dead phone in my hand for a minute or so, not knowing what to do. An operator finally came on the line and asked, “Are you through, sir?” I told her not to disconnect the line and that the FBI would be calling her directly. She gave me a number to call, and I called the FBI in Portland and told them what happened. The call was traced to a phone booth in South Portland. The bombers were part of a left-wing cell of radical former prison inmates who spent several months planning and carrying out a number of bombings in New England. When we think of terrorists, we tend to think of the events of 9/11 and thereafter. But terrorism has been with us for many, many years.

PORTLAND, Maine (UPI) – The composite picture which had been prepared by an FBI artist did the trick.

The new Central Maine Power Co. offices on Edison Drive in Augusta had been rocked by two blasts on May 11.

Injuries were avoided only because the workers were evacuated after a threat had been telephoned to the CMP switchboard just moments before the blast.

Letters left at the a Kennebec Journal and mailed to UPI indicated that the bombings had been carried out by the Fred Hampton Unit of the Peoples Forces, a self-styled revolutionary group which claimed that CMP was singled out because of its efforts to secure a rate increase from the Public Utilities Commission.

The day after the bombing, a person identifying himself as a member of the Fred Hampton Unit called UPI. The call was traced to a telephone booth outside a Howard Johnson’s restaurant in South Portland.

FBI agents from Augusta, Portland and Boston arrived at the CMP offices and began sifting through rubble and interviewing workers. The letters and pieces of the debris from the bombing were sent to the FBI laboratory in Washington.

The FBI agents began interviewing workers at the CMP offices. Some of the workers recalled seeing two young men walking around the new building several hours before the bombs went off.