Don was a friend of mine, from the early days of my newspaper career. I lost track of him for many years, but then discovered that he had died and was buried at the veterans’ cemetery at Bay Pines, not far from my home. I went there on a recent Memorial Day, found his grave and spent a few minutes with him. I wrote this story and took a few pictures, then posted them on a blog to illustrate the sacrifices that our veterans make.

On Memorial Day, I visited my old friend, Don.

I had searched for Don on the Internet a number of times, but I never could find him. The last I heard, he was working as a reporter for the Bradenton Herald, but that was back in the 1970s – so long ago that no one at the newspaper had any memory of him. It was like he had sort of evaporated.

Then one day I tried something different on Google. Instead of searching for “Donald McSheffrey,” I tried a search for “McSheffrey, Donald.” And there he was – buried in Plot 55 45-10 at Bay Pines National Cemetery, right here in Pinellas County.

On Jan. 6, 1968, I started my first newspaper reporting job at the Holyoke (Mass.) Transcript-Telegram. After getting the tour of the building and meeting the other staff members, I was handed over to Don; he was the Transcript’s police reporter, and I was going to be handling his beat on his days off.

Soon we were walking through the cold January air to the Holyoke police station, where Don introduced me around. He showed me the booking sheet, introduced me to the right people, and explained how to get information from the cops without getting in their way.

I was 21; I never really knew how old Don was. His perennially red eyes and the broken blood vessels in his cheeks made it hard to tell. To me, he was a veteran newsman who knew his way around. To him, I was young and teachable. In spite of the difference in our ages, we became buddies.We drank too much and had a hell of a time.

One day, sparks from a passing freight train set off a grass fire in town, and Don and I went to cover it. The fire had spread up a steep embankment and we couldn’t see whether it was endangering the houses that lined the road above us. We decided to climb the embankment and have a look.

The climb nearly killed us. By the time we got to the top we were so out of breath we couldn’t even speak, so we collapsed in the tall grass, gasping for air. Almost immediately, water started pouring on us, and I picked my head up to see where it was coming from. A woman had come out of her back door and was soaking the tall grass – and us — with a garden hose, and we were too breathless to yell at her to stop. So we just lay in the grass, wet, gasping and laughing our butts off.

As well as I got to know Don, he wouldn’t tell me much about himself. I knew that he had two little girls, and I knew that his wife was dead. Other than that, he said little – he wouldn’t even tell me where he lived.

It wasn’t long before I heard the story from some of our co-workers, but I knew Don for several months before he told me about it himself. We were sitting in a bar one night, half-drunk, when he said, “It’s time I told you about it.”

Don and his wife had befriended a man who worked as a writer for a national news magazine. Don said he looked up to the guy, who was very successful and talented. Don and this man drank a lot of beer together. I knew from my own experience that if you knew Don, you were going to be drinking a lot of beer.

One day the man stopped by the McSheffrey apartment when Don wasn’t home. Don’s wife invited him inside and offered him a glass of iced tea. They went into the kitchen, and Mrs. McSheffrey turned toward the refrigerator. When she did, the man grabbed a knife from the kitchen counter and stabbed her repeatedly. She fell to the floor and died.

Don came home that night and found her. The two babies were still in their cribs, unhurt. The police found the man sitting on a doorstep a block away, where he had been sitting since the murder. He told them that he had always wanted to stab a woman to death, but that he had always managed to fend off the urge and figured it would never actually happen.

About a year after I joined the Transcript, Don decided to quit and move to Florida. He got a job at the Bradenton Herald, and he said he was pleased that there was a bar just a few steps from the newspaper’s front door. He had already met the owner/bartender, who he said was a nice guy.

We promised to stay in touch, but we didn’t.

There isn’t much to learn from Don’s gravestone at Bay Pines. He was born in 1934, which solved a small mystery – he was 34 when I met him. He died in 1990, which would have made him 56 years old. I wonder if the alcohol got him, but I guess I’ll never know. I wonder if his daughters live close enough to visit his grave.

Standing by Don’s grave on Memorial Day, small American flags flutter next to each grave stone for as far as you can see.

Besides Don’s, there are 23,952 of them at Bay Pines. Each one of those stones represents a person who lived and breathed and served in the U.S. military. And there is a story to tell about each one of them.

Some friends find it odd, but I really liked writing obituaries. I considered it an opportunity to sum up someone’s life in a way that might have a powerful and positive impact on friends and family, as well as on people who never knew the diseased. This was a pretty good one because it was also about the diseased man’s dog. Everyone loves a good dog story. This obit appeared in the St. Petersburg TIMES.

It is hard for the people at Countryside High School to remember former student Chris Britt, who died Saturday from the effects of muscular dystrophy, without also thinking about Mr. Britt’s best buddy, Sherman.

When Mr. Britt graduated from Countryside in 1990 and rolled across the stage to get his diploma, Sherman was there. In fact, Sherman had become so much a part of Countryside High that the school granted Sherman a diploma of his own.

“They gave him his own little diploma which I believe Sherman then chewed up,” said teacher David Haines, who was Mr. Britt’s case manager.

The year after graduation, Mr. Britt and Sherman moved with Mr. Britt’s parents, John and Judy Britt, to Townsend, Tenn. Last Saturday, Mr. Britt died at the age of 23 at University of Tennessee Hospital in Knoxville.

This Saturday, Mr. Britt’s family and friends will gather at Bayside Funeral Home in Safety Harbor, the town where Mr. Britt grew up, to say goodbye. Sherman will be there, too.

No one was sure what would happen when Sherman first came to Countryside High. Mr. Britt’s parents got Sherman for Mr. Britt and then asked Countryside Principal Roy Sullivan to allow Sherman to accompany Mr. Britt to classes. Sullivan had reservations, but agreed to a two-week trial.

“There was no law at that time about (service dogs),” Sullivan said. “We went ahead and allowed it based on the behavior of the dog, and it worked out fine.”

Other than slipping Sherman the occasional illicit snack in the cafeteria, students left him alone. Things generally went well, with a few unexpected lapses. There was the day, for example, when Mr. Britt and Sherman encountered Coach Joe O’Neill on hall duty, absently bouncing a ball on the floor.

“The ball got away from him and bounced down the hall, and Sherman went after it, with Chris hanging on in the wheelchair,” Sullivan said. “The kids loved that one.”

“If Chris loved you, then Sherman loved you,” she said. “But he and Chris were best friends. Chris was always hugging Sherman, and Sherman would lie on Chris’ bed. Sherman would get jealous if I was getting too much attention from Chris.”

Michael Baty, owner of Bayside Funeral Home, said Mr. Britt’s family wanted assurances that Sherman would be allowed to be a part of Mr. Britt’s funeral.

“They wanted to make sure that I didn’t have a problem with having a dog in the building,” Baty said. “I told them of course not – that Sherman was a part of Chris’ life, and that (having Sherman there) is important.”

Besides Sherman and his parents, Mr. Britt is survived by two sisters, Audra Britt of Safety Harbor and Edie Hartwig of Huber Heights, Ohio; and his grandparents, Francis and Blanche Fox of Townsend. 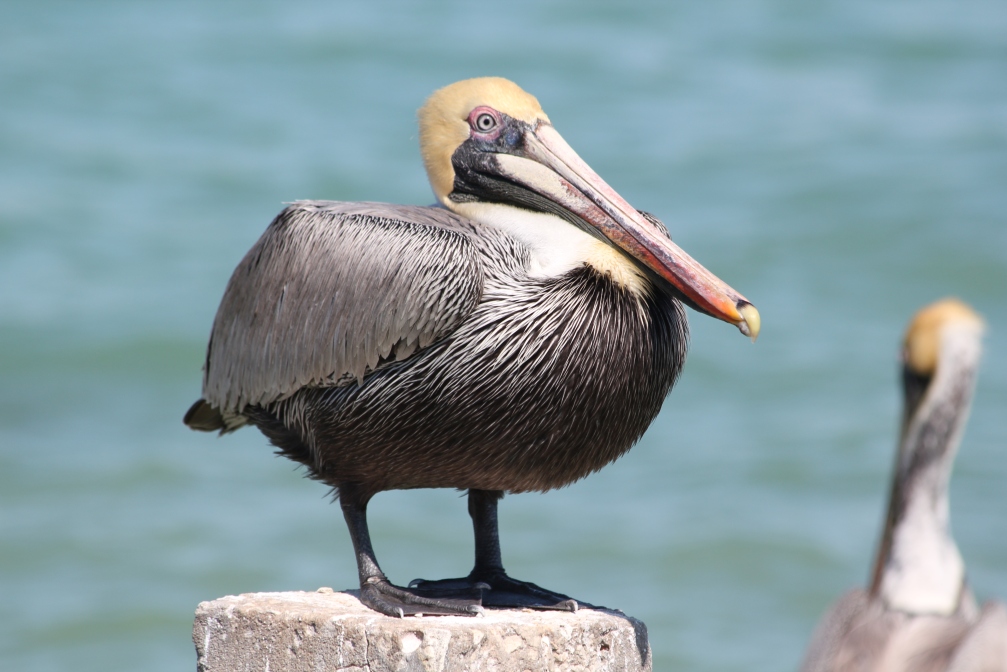 I hope you like bird pictures, because I take a lot of ’em

Recently, a prospective client said she would like to see my portfolio, and I was somewhat startled to realize that I had never put one together.  I’ve had a website for many years that focuses on my public relations business; but a portfolio that actually showcases my writing and my photos? For some reason, I simply never thought of it.

So I’ve spent some time scouring the Internet, looking through my computer files and paging through my dusty old filing cabinets in search of examples of my work. It’s been fun, and I’ve found quite a few examples that I don’t mind sharing (And a few things I would NEVER share in a million years. But that’s another story).

I decided the best way to showcase all this material was on a blog, where I can mix up words and pictures and post things as I find them. Since this is a blog, and newer stuff ends up on top of the pile, you may want to scroll all the way down to the bottom and then work your way back to the top.  But it really doesn’t matter; it’s all going to be a bit of a jumble anyway.

Thanks for visiting. If there is something you see here that sparks some sort of reaction in you, I’d love to hear it.

(And by the way… I have a separate blog now dedicated to my photo work. Take a look by clicking HERE.)

There’s one thing that you might find a little confusing. Most people know me as Bill, but my real first name is Arthur, and as a journalist I always wrote under my real name – Arthur Frederick. So if you see a story that is topped by a byline that says “By ARTHUR FREDERICK”, that’s why.