This is a good example of the “there’s a good story almost everywhere if you look for it” school. I found out about Bruiser by doing a Google search after finding his grave in a pet cemetery. I wrote the story for my wife’s real estate blog.

Bruiser the German Shepherd did not have what you may think of as an auspicious beginning. His first owner got rid of him because he bit somebody.

A dog who bites people would probably not be accepted today as a good police dog candidate.  But back in the early 1970s, things may have been a bit looser. The St. Petersburg Police Department wanted to start a canine unit, and Bruiser was available. So that’s what happened – Bruiser became the city’s very first canine officer in the early 1970s.

Officer Bill Trappman became Bruiser’s handler, partner and friend. Together, they rescued a little girl in what was one of the decade’s biggest local crime stories.

In June of 1972, Trappman and Bruiser were called to a home near Booker Creek. An hysterical woman told Trappman that a man had broken into her home and kidnapped her two-year-old daughter.

Bruiser immediately picked up the trail, even though a recent rain had made tracking very difficult. In just a few minutes, Bruiser led Trappman to nearby Booker Creek, and Trappman’s flashlight beam picked up the sight of a man who was slamming the little girl against a tree trunk.

The man tossed the little girl in the creek and then jumped in himself. Trappman went after the girl, while Bruiser pursued the man. The girl survived the incident, and the man, a former convict who had recently been released from prison, went back to jail.

Trappman gave all the credit to Bruiser.

“He was everything,” Trappman said later in the St. Petersburg TIMES about his canine partner. “I was just the dummy on the end of the leash. He was the best partner I ever had and the best cop I ever knew.” 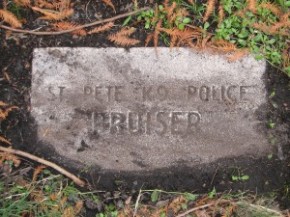 Bruiser was eight years old when all that happened. Four years later, when he was 12, the pain in his legs and hips got so bad that Trappman realized the time had come. He carried Bruiser to the vet’s, and he was put to sleep.

According to Trappman, Bruiser sniffed out more than 14,000 pounds of narcotics during his career, and helped send 127 criminals to prison.

On the day after Christmas, we decided to tour Green Mounds Pet Cemetery, a nearly forgotten pet cemetery behind Fletcher’s Harley-Davidson on US19 in Clearwater. The Fletcher family now owns and cares for the cemetery, having taken title to it when they bought a large tract of land behind their motorcycle dealership.

On the farthest corner of the cemetery, in the shade of a tree, we saw a statue of what looked like a German Shepherd dog. As we approached and then scraped the dirt from the closest grave marker, we saw the name “Bruiser.” Another line said, “St. Pete Canine Police.”

Bruiser’s grave is surrounded by a number of other St. Pete Police canines, perhaps 10 or so. They watch over a peaceful and well-cared-for tract that is the final resting place of several hundreds of pets, mostly dogs and cats but also a pony named Twinkles, who has her own fenced plot.