Novelist Stephen King lived in Bangor (still does), and I would write a story about him every few months. This was a favorite — King has a good sense of humor and he saw the potential for fun in this event right away. King was supposed to eat lunch on this day in his underwear if he had lost the bet with Bangor Daily News sportswriter Bob Haskell; since he won the bet, he showed up in a tuxedo.  Later in that year (1986), the Red Sox won the pennant and went on to the World Series. I called King, a Red Sox fanatic, and asked him if he would be interested in covering the Red Sox post-game locker room. He was enthusiastic about the idea (it would have given him access to the team locker room), but the plan was killed by UPI’s union; no union membership, no work. 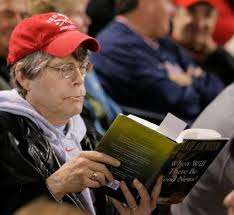 johns and munched a chicken lunch Thursday provided by novelist Stephen King in payment for a sports bet that attracted donations for young cancer victims.

Haskell’s humiliation began in May with a newspaper column in which he predicted the Boston Red Sox, then as now in first place in the American League East, would be out of contention by Flag Day.

“It was like Germany before World War II,” said King, a Red Sox season ticket holder.  “Good people must not be silent in the face of outrage.”

In a guest column, King said if the Red Sox were indeed out of it by Flag Day, he would eat a chicken dinner on the lawn in front of the Bangor Daily News, June 14, in his underwear. He challenged Haskell to the same terms if the Sox were still in the pennant race.

“It was the best lunch I ever had, and I didn’t even eat anything,” King said after about 200 people watched Haskell chew on a chicken leg in the gazebo at Bass Park, next door to the newspaper.

Haskell, who wore a New York Yankees shirt and a pair of cutoff long johns left over from his Army days, said he was through with sports bets.

After lunch, Haskell said he still was not ready to concede a Red Sox victory in the American League East.

“I still think the Yankees are going to win,” he said. “I’m not going to give up on them when they are just eight games out before the All-Star break.”

The Bangor Daily News invited readers to participate by sending in their predictions and money for the Jimmy Fund, a nationwide charity for young cancer victims and their families. The promotion netted $1,250, and King kicked in an additional $1,000 just before Haskell’s chicken lunch began.

The money raised was presented to Jerry and Maureen Hodge, a Bangor couple whose young son, Adam, died of cancer in April.

One thought on “Stephen King, the Red Sox and long underwear”