An earlier post talked about a gathering of former secretaries of state at the Muskie Archives at Bates College in Lewiston, and the occasional opportunity to cover national political events in rural Maine. Here’s another example. Remember that Muskie served as secretary of state during the Carter Administration.

LEWISTON, Maine (UPI) — Former President Jimmy Carter, attending the dedication of the Edmund S. Muskie Archive at Bates College, said Saturday he has little hope for an arms agreement unless President Reagan “is willing to bend” on the Star Wars space weapons program. 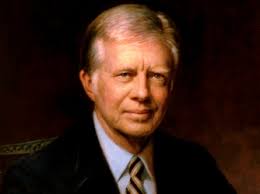 Carter, speaking at ceremonies honoring his former secretary of state, noted that all recent presidents except Reagan have been able to agree with the Soviets on some sort of arms control.

“All my predecessors, and I, have been very successful in negotiating arms control with the Soviet Union, in spite of those who see the Soviet people as an ‘evil empire,” said Carter, who lost to Reagan in the 1980 election.

“Those opponents of good-faith negotiation provide a foundation for our nation’s position that there is little hope for a reduction of nuclear stockpiles,” he said.

At a news conference prior to his speech, Carter said he doesn’t hold out much hope for an arms agreement when Reagan meets for summit talks with Soviet leader Mikhail Gorbachev in Geneva Nov. 19-20 unless the Reagan administration is willing to bend on its Star Wars space weapons program.

“I think an obstacle is Star Wars,” Carter said. ‘It is ill-conceived, expensive and an impediment to arms control.”

Carter, in his speech at the dedication, also said the United States must provide world leadership in human rights.

“In order to be truly great, we must use our power for the enhancement of peace for ourselves and for others,” he said. “This includes forgoing belligerence and force wherever possible and relying wherever possible on diplomacy.”

Carter said the nation’s greatness should also be measured by its commitment to human rights and by its efforts to reduce the danger of a nuclear holocaust.

The Muskie Archive will house more than 5 million documents that span Muskie’s years as governor of Maine, U.S. Senator and secretary of state. Muskie is a graduate of Bates.

Carter was awarded an honorary doctor of laws degree during the ceremony.