This piece was written for the real estate blog. Most of the items posted on that blog were more light-hearted than this one, but we felt that Tampa Bay desperately needs a light rail system. When we used a light rail system in Baltimore while we were on vacation, we were inspired to post this opinion piece on the real estate blog. It got some good reactions, including a nice thank-you from the people who run light rail in Phoenix.

Tampa Bay scores again; Forbes Magazine took a look at the 60 major metro areas in the country and then rated their rapid transit systems. Tampa Bay made the list — in last place.

That should come as only a mild surprise to anyone who has had to drive to work on either side of Tampa Bay. Traffic here is a nightmare, and there are few alternatives to driving your own car to work. We do have a bus system, but there is no rapid transit system, no subway, no passenger rail. 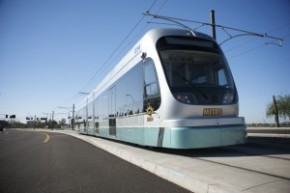 Many of our major roadways started life as sleepy two-lanes.  US19N, the major north-south road that runs the length of Pinellas County, was once a rural two-lane road that passed through miles of orange groves, at least in the northern part of the county where I live. Someone recently told me that he remembered when there was just a flashing light at the intersection of 19 and Tampa Road, a busy major intersection today that serves six lanes of US19 and four of Tampa Road.

If you want to cross the bay between Pinellas (Where St. Petersburg is located) and Hillsborough (Tampa), you have four choices: The Gandy bridge; the Howard Franklin Bridge; the Courtney Campbell Causeway; and Hillsborough Avenue, the only land route, located at the northern tip of Tampa Bay. If you attempt this crossing in rush hour, be prepared to sit.

If you’ve read this blog before, you know I am a fan of light rail, and we might — just might — have such a system in our sights.

A month or two ago, President Obama came to town and announced that the federal government would fund the majority share of a high-speed rail line between Tampa Bay and Orlando. That’s nice, because it would eliminate the drive on I-4, a really difficult bit of Interstate between those two cities.

But the real value of such a line would be the possibility of a light rail system at this end of it. The high-speed line could connect to a light-rail system that would circumnavigate Hillsborough and Pinellas Counties and provide an alternative to the automobile.

We have something called the Tampa Bay Area Rapid Transit Authority (TBARTA), which would like to build that system. Clearwater Mayor Frank Hibbard, who serves on the TBARTA board, spoke at St. Petersburg College recently about rapid transit in Tampa Bay, and said such a system is necessary both for current residents and to respond to companies that may consider locating facilities in Tampa Bay.

All that said, I do have a bone or two to pick with Forbes about this ranking.  We used to live in Washington, DC, and it would be hard to imagine a worse commuting city than that. Before we lived in Florida we lived in Maine, and that meant the occasional drive to the biggest metro center in that neck of the woods, Boston. If you’ve never driven in Boston at rush hour, it is a breathtaking experience. Still, both those cities have good subway systems and buses that run frequently.

I think it is fair to say that Palm Harbor real estate, Dunedin real estate, or Pinellas County real estate in general would be more attractive if it was served by an efficient light rail system