Here is another travel story, this one written for a motorcycle blog that I regularly contributed to but which no longer exists. Another example of first-person writing, which is a shift away from your standard journalism format. I’m pretty comfortable with that now, but it took something of an adjustment at first. Aside from the ability to share one’s travel adventures with others, writing or blogging about traveling is a great way to display pictures and keep memories alive.

We first rode up to the Georgia mountains to celebrate our wedding anniversary. I can’t recall the exact year, but it must have been around 1999 or 2000 – I’m pretty sure I had my black ’99 Road Glide back then.

Beth says I found a bed & breakfast in Hiawassee on the Internet, a place called Mountain Memories, which turned out to be at the top of a VERY steep street not too far from Hiawassee’s main drag. The place had five guest rooms and a great view of the nearby mountains.

We planned to stay there for a couple of nights and just ride around the area during the day, checking out the local sights.

Purely by accident, we happened to be in the area on the weekend of the local Georgia Mountain Fall Festival, which is held maybe a mile or two from the B&B. It’s at a permanent site called the GeorgiaMountain Fairgrounds, located on the shores of Lake Chatuge. We rode over for a look and really liked the festival. Instead of being out in a hot field, the festival grounds are in a heavily wooded area, which provides plenty of shade and a sense that you are walking around an old mountain village.

I’ve always felt that most country fairs are kind of cheesy, but this one manages to be a few notches above that – there’s no carnival rides, just a little train that drags little kids through the fairgrounds. Most of the many exhibitors don’t have anything that I want, but this year I did find a cool leather cowboy hat, and a handmade leather wallet to replace the disintegrating one I’ve been carrying around for the past decade.

Over the years, we’ve gone up to Hiawassee three or four times for the Fall Festival, but we hadn’t been for maybe five years, so we decided a long weekend trip was in order, and we put it on the FWCMC calendar to see if anyone would like to go along. Danny Buckley, Glo Walsh and Marie Buckley signed up right away.

Some days before we left Pinellas County, Glo decided it might be better not to ride her Sportster such a long distance, so instead she and husband Jerry decided to drive up to Georgia in their RV. They dragged along Jerry’s dresser and got up to the mountains a day ahead of the rest of us, meeting us for lunch when we arrived at the Dillard House for lunch.

So here is how it went: Bill, Beth, Danny and Marie left on an early Thursday morning from the club’s north departure spot at the Circle K on Tampa Road and ground out a morning’s worth of miles on I-75. We got to Lake City near the Georgia state line by around 11:30 a.m., just in time for lunch at a place called Mike’s Café and Grill, a place I had found on Yelp before we left. We never would have found Mike’s without Yelp – the place was located in a strip mall (hey, Lake City is still Florida) on a side street near the Interstate.

After lunch, we headed east until we found Rte. 441, a mostly two-lane highway that takes you all the way to the Georgia mountains while avoiding Atlanta. We spent the rest of the day on 441 and ended up in Milledgeville for the night. Mileage for the day: About 430 miles.

This is where we said goodbye to Marie, who had decided before we left that she wanted to head east toward the Georgia coast and then on to Jacksonville and then Daytona to visit some friends and some H-D dealerships. We were sad to see her go because she’s such an amiable and fun traveling companion. So, with Marie heading east, the rest of us headed north, continuing up 441 for about a 2.5 hour leg that took us to TallulahFalls. This is a very beautiful series of waterfalls that Wikipedia describes this way:

“Tallulah Gorge…is formed by the Tallulah River cutting through the Tallulah Dome rock formation. The gorge is approximately two miles long and features rocky cliffs up to 1,000 feet high. Through it, a series of falls known as Tallulah Falls drops a total of 490 feet in one mile. Tallulah Falls is actually composed of six separate falls… “ Tallulah Falls Danny, Beth and I paid the $5-per-vehicle parking fee and drove

on to the Visitor Center before walking a hundred yards or so to the first lookout. We ended up spending about an hour there before riding on to Dillard House for lunch, about 30 minutes further up the road.

If you haven’t eaten at Dillard House, it’s an experience not to be missed. There’s always a big crowd there, but the wait for a table is very short – they’ve got plenty of seating available.

Here is the big draw – you don’t order off a menu, you just sit down, order drinks, and the food processional starts almost immediately. Waiters and waitresses start carrying out the big platters of food that is served family-style, just like mom laying out food at Thanksgiving. Fried chicken, chicken-fried steak, country ham (hope you like salt), catfish, creamed corn, green beans with ham, two styles of potatoes, etc. etc. It just keeps coming out of the kitchen until you cry uncle.

Everything is cooked just right and you leave with the buttons popping off your shirt. It’s truly an experience.

The spread at the Dillard House

Dillard House is where Jerry and Glo met us, having ridden their bike over from their campground in Hiawassee. Once we were done eating, Danny rode on to his motel in nearby Clayton while Jerry, Glo, Beth and I rode about half-hour or so to Hiawassee. Beth and I found our turn to the B&B (which is now called Chancey Hill Inn Bed & Breakfast), and we got checked in and settled for the night. After gorging on all that southern fare at the Dillard house at around 2 in the afternoon, we figured we wouldn’t need dinner, and that’s how it worked out.

Next morning, just as we planned, the four of us met up at the local McDonald’s at around 10 a.m. for the short ride to the fairgrounds. Jerry dropped Glo off and went off for a ride while the rest of us met outside the gates.

This was a pretty good deal cost-wise. It cost $11 per head to get in, and that INCLUDED the concerts, which on this day was going to be Ricky Skaggs and Kentucky Thunder.

Around 2005, we rode with friends up to New England and attended the Maine Lobster Festival in Rockland, Maine. Ricky Skaggs was the headliner at that event, too. I knew who Ricky Skaggs was, but I can’t say I was all that familiar with him or theBluegrass music he played – the last time I really listed to Bluegrass was when I was young and was sort of a fan of Flatt and Scruggs.

That concert just blew us away, and we became fans on the spot of Ricky Skaggs and his band, Kentucky Thunder. When we saw they were playing at the Georgia Mountain Festival this year, it was a major reason for us to decide to go.

We weren’t disappointed. A very good eight-piece house band came out and played about 40 minutes’ worth of country music, and then Ricky Skaggs took the stage with his six-piece band. The banjo, mandolin and guitar picking was just unbelievable, and the guy playing standup bass did a couple of solo riffs that were really spectacular. A GREAT concert.

We all gathered that evening for a meal at Brothers in Young Harris, a place I recognized. I’ve eaten there before, just can’t remember exactly when. This was a fun, relaxing meal that made me realize how lucky I am to have such good friends.

This was the last time we saw everyone. Danny was going to accompany Beth and me south the next day, but he called to say he had decided to get an earlier start Sunday morning and ride the 600+ miles home to Pinellas in one day. Beth and I were planning on making it a two-day trip with an overnight stop in Americus, in Georgia’s southwest corner.

So Sunday morning we headed east, planning to go to Clayton and pick up 441 again for the ride south. But a few miles out of Hiawassee the Garmin told me to turn south onto Rte. 17, which we did. It was a great motorcycle road that took us to Helen,Ga., a German-like community that is definitely worth a look if you are ever up that way. We didn’t stop (it was WAY crowded, parking was at a real premium and we have been there before) but we enjoyed gawking as we passed through.

We got to Americus around 5 p.m. and settled in at the Windsor Hotel, a GREAT 100-year-old downtown hotel that was restored a few years back. We have stayed there may times and we never get tired of it. 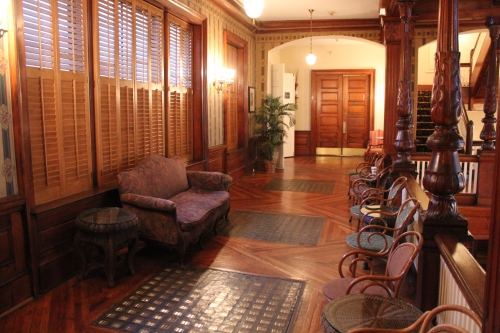 When we rode by the front of the building I noticed a good-looking blue dresser parked out front, and thought it looked a lot like Jim DeLeo’s bike, which has a rare color combination. By the time we checked in, I had forgotten about it.

Next morning, however, we were eating breakfast in the Windsor’s beautiful dining room (we were the only customers) and who walks in but Jim, who was heading north for some riding in Kentucky and Tennessee.

It was great to see him and we enjoyed a little breakfast together before we went our separate ways.

Monday was about what we expected – 350 miles down US19 and home.  The nice part of this day is that US19 up north, in southern Georgia and northern Florida, is a really nice ride with good scenery and little traffic.

We thought about lunch in Perry, but there really isn’t much there in the way of restaurants, so we pressed on to Barbecue Bill’s in Chiefland. That made for a late lunch but we like eating there and we ran into a couple of Harley guys who were heading home to Chicago after a week of riding through Florida.

So all-in-all this was a delightful five-day excursion with great friends through some very scenic country. Let’s do it again!

Here are some additional pictures:

Display at the Georgia Mountain Fair

Alpaca at the Georgia Mountain Fair