Back in the mid-1980s, a young Maine schoolgirl, Samantha Smith, wrote a letter to Soviet President Yuri Andropov, expressing her worries about a possible war between the USSR and the U.S. He invited her to visit the Soviet Union, and she did, attracting worldwide media attention. A year or so later, Samantha and her father were killed in a plane crash in Auburn, Maine. She was just 13. I was rousted out of bed at around midnight on that night and told to go and cover the plane crash scene. I wrote this story a few days later, following her funeral service in 1985.

AUGUSTA, Maine (UPI) — Samantha Smith, the schoolgirl who traveled to Russia on a mission of peace two years ago, was mourned by 1,000 friends and dignitaries and eulogized by Soviet leader Mikhail Gorbachev as an ambassador of ‘good will, friendship and love.’

The crowd, including her TV co-star Robert Wagner and a Soviet diplomat carrying a message from Gorbachev, filled St. Mary’s Roman Catholic Church for Wednesday’s memorial service for Samantha and her father, Arthur. Scores of other mourners lined up outside, some watching the services on a television placed on the lawn.

‘This little girl did things that governments don’t have the power or the will to do,’ her school adviser told the throng. 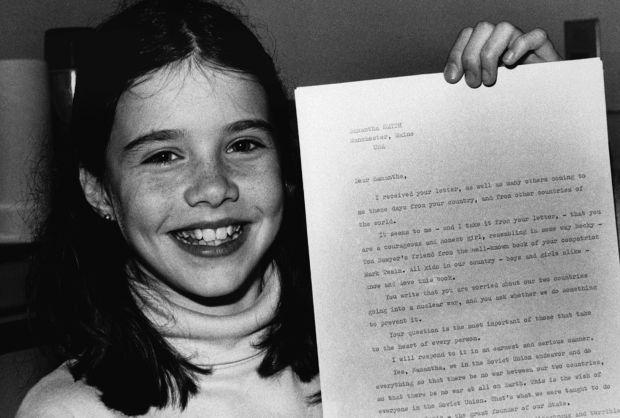 Samantha, 13, and her father, 45, were among eight people killed Sunday night when a Bar Harbor Airlines plane crashed about a half-mile short of an airport in Auburn.

Samantha’s mother, Jane, leaned heavily on the arm of Wagner, who flew to Maine from Switzerland to attend the services. Wagner and Samantha were to star in a new ABC television series called ‘Lime Street.’

Samantha and her father were returning from London, where scenes for the show were being taped, when the plane crashed.

The Smiths’ bodies will be cremated at a later date.

The bereft family sat in the front row of the church, located several miles from Samantha’s hometown of Manchester. Wagner sat directly behind Mrs. Smith.

A children’s choir sang ‘We Are The World,’ and the church organist played the hymns ‘O God, Our Help in Ages Past’ and ‘Let There be Peace on Earth.’

Reading a statement from Gorbachev, Kulagin said, ‘You should know millions of mothers and fathers and kids back in Russia share this tragic loss.’

‘The best thing would be if we continued what they (Samantha and her father) started, with good will, friendship and love,’ he said.

President Reagan earlier sent condolences to Mrs. Smith, saying ‘millions of people … will cherish and remember Samantha, her smile, her idealism and unaffected sweetness of spirit.’

When Samantha was 10, she wrote a letter to Soviet President Yuri Andropov, telling him of her fears about nuclear war. Andropov responded by inviting her for a two-week tour of his country in July 1983.

William Prebble, Samantha’s adviser at Maranacook Community School, said from the pulpit that he and a group of students met to talk about Samantha’s life and death.

‘We made a list of things we would want to do before we died,’ he told the mourners. ‘We decided we’d like to travel and that we’d like to meet many people. We would want to make some contribution, and if we were successful at that, we wouldn’t want to be stuck up or conceited.

‘We agreed that Samantha had accomplished many of those things,’ he said.

Other speakers were Gov. Joseph E. Brennan, the head of Manchester’s governing Board of Selectmen and several family friends.