While we’re on the subject of islands off the Maine coast, this was a story I wrote in 1989 after seeing a small news story in the Bangor Daily News. I’m sure that Vinalhaven and the other Maine islands that are big enough to have roads and ferry services have more serious problems to worry about. But then, what DO you do with junk cars on an island?

VINALHAVEN, Maine (UPI) – Vinalhaven Island’s tiny network of roads has spawned a chronic and difficult waste disposal problem – hundreds of junk cars that rot in back yards and clog illegal junkyards around the island.

Last fall, town officials spread out around the island and conducted a nose count of inoperable automobiles. They found 438 of them, one for every three island residents. The year before, the town rounded up and got rid of another 200 junked autos.

On the mainland, junk cars can simply be hauled off to wrecking yards. Yard operators will often tow the old cars away for free, and may even pay a little if the junker isn’t too old.

But on the islands that dot the Gulf of Maine, getting rid of the junkers is anything but a simple matter.

“Everything is more expensive on the island because of the transportation problem,” said George Putz, a writer and researcher who works for the Island Institute, a mainland-based organization that provides services to the offshore islands. 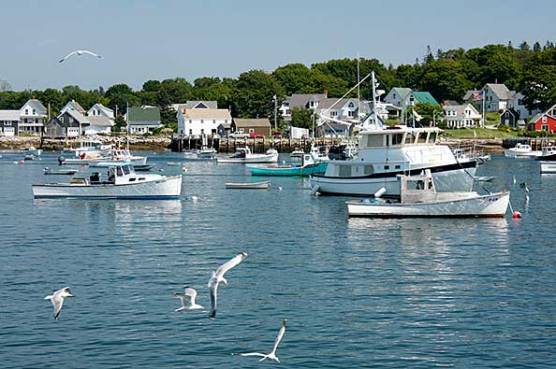 Vinalhaven’s junk car problem is not unique among the offshore islands. But it may be somewhat more serious because Vinalhaven is big for a coastal island, having more than 1,000 year-round residents. It also has a paved main road and a total road network that covers 45 miles, and the island also is served by a ferry that can carry as many as 17 cars at a time.

When a resident’s car dies, it isn’t usually pushed to the ferry for a final ride to the mainland. More often than not, the old car is simply pushed aside, and another car is purchased to take its place.

The result is an ever-growing population of automotive hulks that spoil the landscape and create headaches for town officials.

Victoria Dyer, Vinalhaven’s town manager, said most of the old cars were crushed and hauled off the island last October at a cost of more than $22,000. Over the winter, however, 10 more cars were abandoned on Vinalhaven, and Dyer said steps will have to be taken or the dead car population will continue to rise again.

“We have been working with the town’s attorney on that,” Dyer said. “She has come up with a proposed ordinance for the Town Council to review.”

The proposed ordinance would allow the town to collect a $75 fee every time a car is registered on the island. The money would go towards fund that would be used the finance the removal of abandoned cars.

But Dyer said the town will have to be realistic about forcing people to get rid of their own junked autos. Individuals, she said, would have as much trouble as the town in getting abandoned cars over to the mainland.

But the problem was so great last year that the town had to look for outside help. It came in the form of John Clark, owner of Clark’s Custom Car Crushing of Hallowell.

Clark began crushing old cars years ago with the trunk of an oak tree dangling from the cable of an old crane. Now, Clark operates a high-tech car crushing operation, using a 30-ton hydraulic Texas Press car crusher that he hauls around the state behind a big GMC tractor.

Clark didn’t bring the cars to the crusher. He simply hauled the crusher to the ferry slip in Rockland and floated it across the bay to Vinalhaven last October, where he spent the month of October crushing old cars.

“It just about made that ferry sink,” said Richard Clark, John’s brother, who watched the big Texas Press when it rolled onto the ferry boat. “It dropped the ferry right down in that water some.”

John Clark and the Texas Press worked on Vinalhaven for the entire month of October, crushing more than 400 cars. The flattened autos were then ferried to the mainland and hauled off to Boston, where they were shipped overseas.

“Eventually, they come back to this country as Toyotas,” Richard Clark said.

John Clark was paid $22,000 by the town of Vinalhaven for crushing the cars.

Dyer thinks if the town can come up with some regular financing, an arrangement can be worked out in which the abandoned cars can be taken ashore two at a time by a town-owned truck.

“We have to send a town truck over to the mainland to pick up gravel and bring it back,” Dyer said. “I have located a market for the old cars in Thomaston.  Maybe when we send the truck over for gravel, we will be able to send it over with a couple of old cars in the back.”