Jud Strunk was a well-known folk singer and entertainer who lived in the western mountains of Maine — right in the middle of ski country. His career had a couple of highlights; he had a hit single called “Daisy a Day” that did well on the pop and country music charts, and he spent a season as a regular on the hot comedy show “Laugh-In.” But mostly he was a talented Maine guy who never really wanted to leave his native state. In 1981, at the age of 45, he died when he suffered a heart attack while flying his vintage airplane near Maine’s Carrabassett Valley Airport. I didn’t know him very well, but I do remember drinking with him and a group of people at a bar in Winthrop, Maine in the late 70s. This is a story about how Strunk’s sons memorialized him several years afte rhis death.

KINGFIELD, Maine (UPI) — Jud Strunk, a folk singer and a regular on the TV show “Laugh-In,” was best known around Maine’s ski country, where he played music and raised hell until a plane crash killed him in 1981. 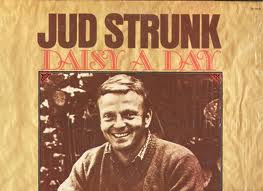 Just before his death, Strunk, 45, and his teenage son Joel loaded up a battered Volkswagen Thing and headed out on an 8,000-mile trip that took them to Colorado and Texas and a lot of places in between.

Joel and his brothers, Rory and Jeff, wanted to find a suitable way to make note of their father’s life. After talking about the trip and about a poem Strunk had written entitled “Bury Me on the Wind,” they decided to re-trace the route in the same old orange Thing and scatter their father’s ashes along the way.

Jeff couldn’t make the trip, but Rory and Joel set out in the convertible, vowing to keep the top down throughout the journey because of their father’s love of the wind.

A videotape Rory made of the trip, entitled “Bury Me on the Wind,” premiered last month at a local ski resort tavern and has been gathering plaudits ever since. The video won second prize in a national contest sponsored by Sony, and also placed in the American Film Institute’s student video contest.

“After my dad passed away, we were listening to his music and we got the inspiration to retrace the trip,” Rory said. “He loved the wind, he loved flying, and we thought that scattering his ashes on the wind during the trip was a most appropriate way of saying goodbye.”

The original trip was part work, part play. Like many musicians, Strunk went on tour during the summer. During this tour, he and his son combined gigs with visits to places that had special significance to Strunk.

The memorial trip faithfully followed the route of the original tour, with the brothers scattering their father’s ashes at important spots along the way.

2 thoughts on “Jud Strunk uniquely remembered by his sons”